Collected volume... of what? 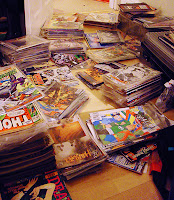 Today for various reasons I found myself in Nostalgia & Comics of Birmingham. It's one of the three comic shops that I have available to me in the area I live and the only one that's not a Forbidden Planet. It has a large collection of Trade paperbacks and back issues. It's the TPB's that interest me the most though as its selection almost rivals Amazon at times. 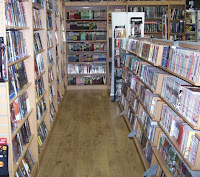 I wasn't there today looking for anything specific I was just killing time while waiting for someone, but as usual I ended up leaving with a Flash book. This one's called 'Race Against Time' and it collects #112 to #118. The only reason I am able to tell what issues it collects is because there's a 'Covers Gallery' at the back of the book. Nowhere else in the volume does it say what issues are contained within.

This is a common gripe that I have with buying TPB's, the lack of historical pride. Even my most recent purchase 'Batman & Robin Volume one' (New 52 #1 to #8) doesn't give a proper list of issues and dates.

At this time it's easy to 'keep up' with the release schedules of the New 52 but in ten years it will be a little harder to place the issues in time and continuity. Granted things are better now as that 'new 52' text goes a long way to setting in stone where in time it's from. In the case of older issues I would just like a little number on the spine to give me a clue where all these volumes fit together in the timeline of my shelf.

Even the 'classics' suffer from this as I flick through a random book on my desk (Frank Miller. Batman: Dark Knight Returns) I notice that there is no easy to spot date for the original printing of the issues (it maybe in the texts at the back but its not easy to spot) I understand that TDKR was not written in context with the rest of the Batman books of the time but for shelf positioning alone this kind of thing is useful (some times Google seems like too much hassle)

This may seem like a petty gripe and in many ways it is but if a new reader was to walk into a Comic Store, he/she would have difficulty picking a title, this is obviously an age old concern but with the state of the industry at the moment a simple reading guide leaflet would go a darn long way with the newbies.

This problem can even extend to single issues just the other day when on the hunt for Batgirl #21 I was some what confused when an issue from 2011 had the same issue number as the one I wanted from 2001.

I know that paying attention to the 'year' on the cover should avoid this but the initial confusion could be resolved with a more natural numbering system, even a letter to signify how many times a title has reused a number due to reboots or character changes.

TLDR version - Number stuff properly, you will sell more in the long run!
Posted by Unknown at 15:14