I read the Teen Titans. For the most part I like the Teen Titans, its a bit silly at times and lacks the character depth that it had before the New 52 but I stick with it because of former glory's and earned patience. I do however have concerns regarding Super Boy.

There was a time when Super Boy was a firm part of the Teen Titans but now he is his own man and has his own comic to prove it. Over the last 11 issues I have seen no character development for him, no plot lines opened other than the ones borrowed from the Culling cross over.

The truth is that I only enjoy Super Boy as an extension to the underwhelming Teen Titans. I find it strange that DC allow a character to exist in his own title when he is literally the only character in the book. Dr Fairchild was almost a character but then she fell out of the book in quite a confusing way and ended up with the Ravengers (looking to be a much stronger story driven title) some time later. Other than her short lived time as a friend Super Boy has been a book filled with pointless cameo's from Teen Titans and now we are at issue 11 and as yet Super Boy has no enemy of his own, he hasn't met Superman  (the closest thing to a farther he could possibly have) as far as I can see there is no independent life in sight for him.

It's an interesting experiment in character development to have a book that serves only to compliment another title and I would understand if this approach was used to support a Goliath like Superman or Batman but in the case of the Teen Titans I'm not sure I 'get it'. 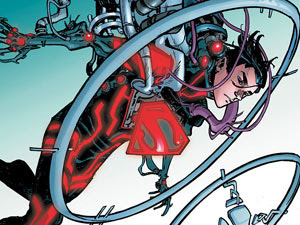 The disjointed nature of the title was apparent even recently when we where told that he had recently robbed a bank and found an apartment. Two major events in this characters life that we where not given the chance to read about because they happened only in a conversational flashback. Instead of these interesting moments in his life we get to watch him beat up a robot who we know very little about and will probably never see again.

The writing in this title is not a story arch of any real substance and if I didn't read Teen Titans then it would hold no value for me.

I wonder how DC will publish the Super Boy TPB, I'm sure there is no story arch to title it from apart from possibly 'The culling - A Prelude'.

I still enjoy the character and would love to see him come into his own but unfortunately I don't think he has much future in a stand alone title.

My feelings on the lack of over arching story are also true for a few other new 52 titles and pretty soon I'm going to have to have a 'Culling' of my own where I reduce my monthly reserved titles.
Posted by Unknown at 09:55