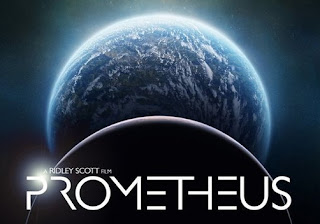 I know its crass to talk about a movie on a blog that literally has the word comic in the title but as a human I enjoy films, as a pop-culture infused net junkie I enjoy movies with space ships in them. I don't enjoy going the cinema for a few reasons but after recently enjoying the Avengers with gusto I was willing to give the movie industry a little more of my money. Dear god that was a bad decision.

Ridley Scott is the large directorial power house behind this movie and with my existing love of the Alien franchise I was happy to go and see this disconnected prequel.

The basic intent of the movie was to reopen the 'Aliens' franchise with a story that although being housed withing an established universe was not directly related to the events we are all so familiar with.

The movie is superbly acted and flawlessly realized with some of the most astounding and realistic visuals that I have ever seen, this however does not make a good movie on its own.

It's a reverse concept, instead of tackling the questions about the right to create life and the need for a shadowy corporation to control that life like the original movies it's about the human race and our need to know where we come from. At least that was Scott's intent as far as I could understand from the disjointed and ill conceived plot lines.

The movie starts with an enigma, a large pale man willingly sacrificing himself for no obvious reason by taking a substance and then turning to dust, but this scene is not referenced again in the move making me wonder what the scene was about unless its going to be explored in a sequel (setting up a follow up in the first scene is quite bold if you ask me)

The movie surprises me a little later by not utilising Charlize Theron as the Ripley stand in but switching to a character that I had up until a certain point expected to die early on. What's the point in having such a strong female presence in a movie linked to a franchise known for its strong female leads to usurp her with a far weaker character? - I face palmed, for real.

Having Both Charlize Theron and Moomi Rapace in this movie was a mistake. Both are great actresses but the story only required one the of them. By stripping out one of the characters the story could have been far smoother from the start.

There are many other school boy mistakes in both plot and casting (Guy Pearce being unrecognizable for one) throughout the entire movie. At one point the weaker lead (Noomi Rapace) was running about a space ship dressed like a white bandaged Leeloo Dallas from Fifth Element showing no desire to shoot anything at all, ever.

Now I come to think of it I'm not sure there are any bullets fired in this entire movie, aside from a few nameless and faceless space marines taking a pot shot or two at a large white man.

I would love to literally strip this plot down to its key mistakes scene by scene but I am not sure there is any real need, I am certain that all science fiction veterans will see this for the sham that it is and not place it in the same ball park as the masterworks that it tries to prequel. I would rather watch aliens 3 and Resurrection on repeat for a month that sit through the Prometheus trailer once more. (Speaking of trailer....)


That little video there is literally the best parts of the entire movie and is better Directed from start to finish.

There was obvious directions to take with an Aliens prequel even a disconnected one like the story that this one was. People want to see either aliens or marines, maybe even both fighting over, well, life. So to tell the story of some scientists makes no sense unless at least a few of them turn out the be bad asses.

If our boy Ridley didn't want to do the obvious thing when making this movie then he should have told a vastly different story but made it more grounded in the already established technology and society of the franchise and explored its corporate side but either way if your going to get Charlize Theron involved in an Aliens movie give her an assault rifle and some thing's to point it at.

Prometheus is a movie literally made from the ground up to set a tone for a follow up. It's a crying shame that this universe and its rich and beloved lore has been squandered on this kind of self gratifying crap
Posted by Unknown at 17:48